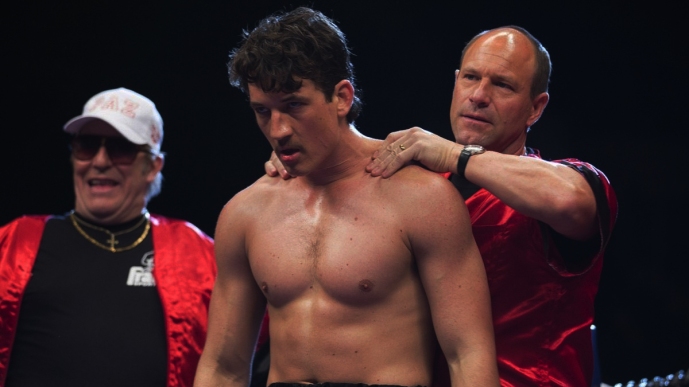 Miles Teller portrays one of the biggest comebacks in sports history, on screen. Vinny’s win of two world title fights shoots him to stardom. However, after a near fatal car accident – which leaves his neck broken – the boxer is told he can never walk, let alone fight, again.

The film follows a generic formula for its genre. Teller’s character starts on a high – boxing and gambling with a beautiful woman by his side. He then faces a knockout (yay for boxing puns), but with soulful strength and determination Vinny returns to the ring just over a year after his tragedy. Although the premise is typical, this movie is memorable because of its incredible, true to life narrative and the compelling characters. Younger successfully creates a working class backdrop of Vinny’s home life, family and upbringing – which seems to be the driving force for his unwillingness to give up on the one thing he lives for.

There camera’s positioning is intimate and there are many moments during Vinny’s recovery that make us wince and pull a double-chin face because of the clicks and cracks that come from his body. During fight scenes, Teller moves and swings like a true boxer. When first introduced to Vinny, we experience a witty and sophisticated bad boy. After the car accident, his spirit changes and he beings to loose himself. Teller authentically portrays the transition of a man with no hope, become a man with drive, courage and discipline.

Aaron Eckhart depicts an award-deserving performance; alcoholic coach Kevin Rooney who assists Vinny throughout his journey and pushes him further than his father could bare to.

You will feel every single punch.